Why I will not stay to witness Kolkata Pujo

It is that time of the year in Kolkata when every waking moment is spent to plan the upcoming weekend. Every person I meet only has plans for the Pujo weekend-what to shop for, what to wear, where to go, what to eat blah blah blah. Every space available is covered either by a huge pandal (pronounced 'pandle' like a handle by locals) or by huge flex advertisements. Every establishment is on sale or is so good that it doesn't need to be. Every building is covered with lights. Every one is obsessed.

I have asked many of the self proclaimed Pujo lovers what this weekend means to them. They all said fun. I further asked who did the actual Pujo at the Pujo and after a small pause, I got the same answer. The purohit. 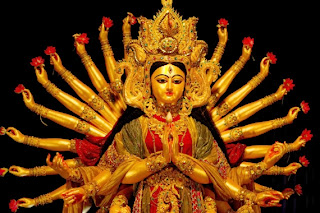 Is this devotion? I don't know. For an outsider, starkly no. I was brought up in a simple north Indian home in, duhh, north India and Navratri have been a time of prayers, smoky mornings to wake up to(thanks to the morning Puja), satvik food that more than covers the days' fasts, cheerfulness and a general devotion to the Goddess. It meant feeding 8 girls and 1 boy at the end of the Ashtmi and then having the best home made brunch of the year with aloo, chane, kheer, halwa and puri. A small hawan at home has been the symbol of the bi-annual period of our dedicated attempts of devotion. Giving up non-veg or tamasic food is also a representation of that emotion. All this make up Navratri for me.

As an outsider I am surrounded by messages communicating an immense need to look good for those 4days. Slim down, get Botox shots, take a spa session, buy new clothes, get new jewellery, pick a new phone, dab some makeup, fund a wacky pandal design, buy tickets to enter a pandal from the VIP gate, get invited to parties, host a catered lunch. In short, show the world your "ideal" self-image or be left out. I've seen a few cultures in my short life but never have I witnessed an annual fiesta that forces you to conform to such a degree as this one. I always thought weddings in north India were uselessly flashy and forced conformity in dress et al but frankly the madness around me right now is over shadowing all that and more. No one dare be caught in old, repetitive clothes in that period. You just can't not be pandal hopping (move over pub hopping). You just have to have the latest look for your appearance. You just have to conform.

In this celebrations of a Goddess' homecoming, there is a menagerie competing to show-off where and how they'd keep her. Maybe the route to salvation with the Goddess does come from the opposite extreme of austerity. Kolkata seems to believe so. Has believed so and would continue to. I however choose to stay an outsider and not witness the madness.
Posted by Unknown at 1:43 AM
Email ThisBlogThis!Share to TwitterShare to FacebookShare to Pinterest
Labels: durga puja, durga pujo, kolkata, living alone, pandal

Join in the fun